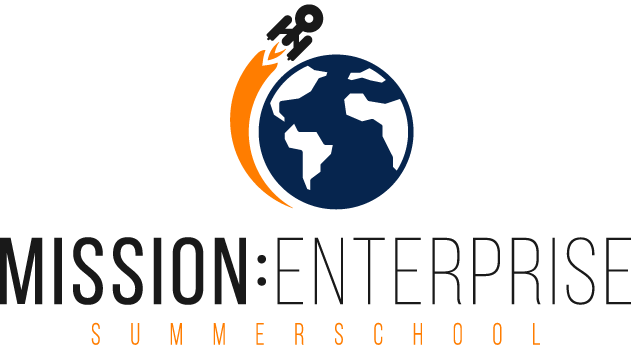 1st summer school in Stuttgart, Germany
Who can apply?
Criteria that must be met:

Additional bonus:
You are a student who has:

You can either take part with an already existing idea that you want to realize in our summer school or you can take part in an ideation workshop beforehand, which will help you to come up with a suitable idea.
How to apply?
For the application to our Mission:Enterprise Summer School, you need to write a motivation letter. Here are some examples of questions you should answer in your letter:

What happens next?
Our start-up experts from each university will revise your motivation letter.  Make sure to answer all the questions mentioned above and think about what revenue you get by participating to the summer school. The best applicants will then be invited to an interview at the respective university. Four students from each university will be selected to go to Germany. In case of more applicants than spots, a waiting list will be set up and you will be informed in case you receive the grant.
Timeline for Mexican students:
Application by 15 February 2020 | decision of participants by 29 February
Timeline for Israelian and Romanian students:
Application by 29 February 2020 | decision of participants by 13 March
In case you come from a non-EU country, Stuttgart Media University will support you with the visa application by writing an invitation letter.
Ready to get started?
Then apply now:
UNAM students by 15 February 2020
Politehnica and Sapir by 29 February 2020
by filling in this application form: https://inopai.com/webform/qtH846D2ht7QF9yR/

On September 1, 2019, the new Mission:Enterprise project was launched at the Startup Center of the Stuttgart Media University (HdM). Mission:Enterprise is a project within the Baden-Württemberg-STIPENDIUM for students – BWS plus, a program of the Baden-Württemberg Stiftung. The project will be supported over three years with a sum of 146,000 euros. The HdM Startup Center is in charge of the project which connects not only the students with each other but also the teachers of entrepreneurship education. Other participating universities are the Sapir College (Israel), the University Politehnica of Bucharest (Romania) and the Universidad Nacional Autónoma de México (Mexico).

The aim of the project is to create an international network of universities focusing on entrepreneurship, which will offer regular summer schools on the topic, exchange professional information and, after the end of the funding period, will be sustainably anchored via eLearning modules. The summer schools will take place in Germany, Israel, Romania and Mexico and will enable transcontinental cooperation between students and teachers on various focal points in the field of entrepreneurship.

Project manager and contact person at the HdM Startup Center is Violetta Fasulo.

Baden-Württemberg-STIPENDIUM for University Students – BWS plus

This project is implemented through the CENTRAL EUROPE programme co-financed by the ERDF.